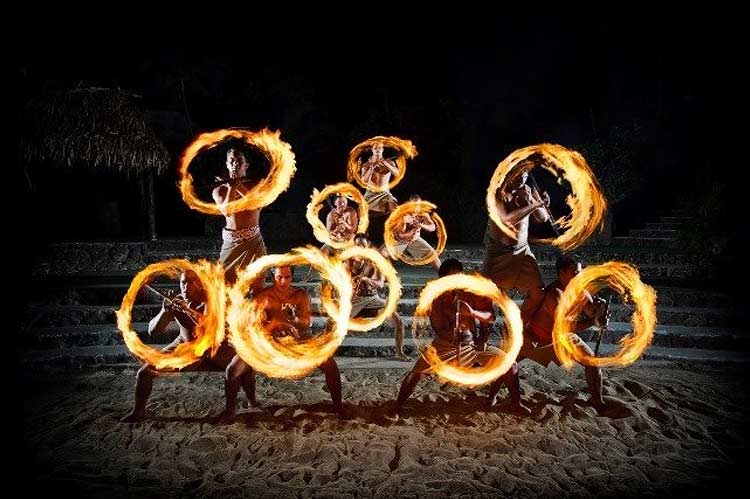 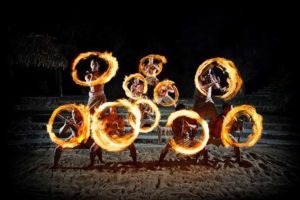 In practice, the ritual has evolved over time and in most places today, rods are used instead of knives for the safety of the dancers and the audience. This, however, doesn’t make it any less spectacular. It’s still dudes twirling stuff that’s on fire!

Originally, this was known as siva afi, and instead of knives, a Samoan war club, or nifo oti, was used. This was an incredibly dangerous act as the club’s steel would become crazy hot. Essentially, it was a flashy display of a warrior’s prowess in battle.

This ceremonial dance is steeped in history. Today, many Hawaii luaus offer a chance to watch the show. So, which one is the best place to see dudes twirling flaming blades?

We think the answer to that is the Polynesian Cultural Center on Oahu’s North Shore.

About the Polynesian Cultural Center 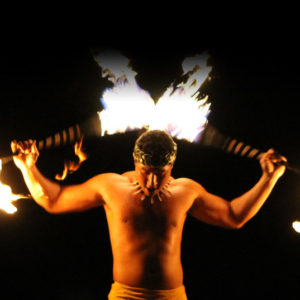 Another dude with flaming blades!

The Polynesian Cultural Center opened to visitors in 1963, and has undergone regular expansions and updates to provide visitors with a unique and incredible experience. Among these is their evening show Ha: Breath of Life, which features over 100 different performers, including expert fire knife dancers. It really is a performance that has to be seen to be believed.

The PCC isn’t just about fire knife dancing, though. While you’re there you can explore the past and present of several of the places that have contributed to Hawaiian culture as we know it.

There are six “villages” to visit in the 42 acres that make up the Polynesian Cultural Center. Hawaii, Tonga, Fiji, Samoa, Tahiti, and Aotearoa (New Zealand) are each represented.

Visiting the villages offers you a unique opportunity to meet Pacific Islanders who share their culture with food, activities, dance, and music. 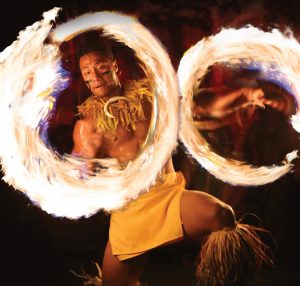 The Polynesian Cultural Center is also host to an incredible annual fire knife competition—using actual blades—that has been held annually in the month of May for over 25 years. There are multiple categories, including men, women, and children in various age groups. Competitors come from all over the world to take part, and past winners have hailed from Hawaii, Tahiti, Samoa, and the Cook Islands.

The PCC is one of the most popular tourist attractions in Hawaii, offering an intriguing—and often breathtaking—glimpse into the islands of Polynesia. It’s also home to a terrific luau and an evening show that offers the best fire knife dance performance around.