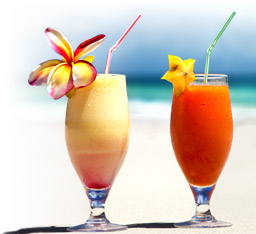 Most luaus offer a selection of delicious tropical cocktails

A luau is an evening of festivities marked by great food, terrific company, and unforgettable entertainment. Many people would also add “tasty adult beverages” to the list, and who are we to disagree? As you’re filling up on kalua pig and poi, enjoying the breathtaking sights and sounds of a fire knife dance, and chatting with the other guests, you just might want to keep one of these finely crafted cocktails nearby.

While these are intended for adults, some of them are available in a virgin option. All you have to do is ask!

There’s a pretty good chance you’re already familiar with the mai tai. It’s very tropical, and is everything you could want in an iconic beverage for a luau. A typical mai tai is made from rum and Triple Sec or orange Curacao, which gives it a fruity touch. It usually includes almond syrup, and is topped off with a squirt of lime.

There are different varieties of mai mai out there, but as the saying goes: If it ain’t broke, don’t fix it! 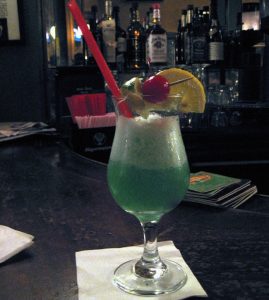 The Blue Hawaii actually has its roots in Hawaii circa 1957. As the story goes, Harry Yee, a bartender at the Hilton Hawaiian Village in Waikiki, was approached by a representative of Bols, a Netherlands-based distiller, with a request. The rep wanted Yee to create a new drink using his company’s blue Curacao  liqueur. The bartender went to work and came back with a blue drink made with rum, pineapple juice, and sweet and sour mix. At least, that’s the most common variety you’ll find today

Not only is it delicious and refreshing, the blueish-green color is oddly intriguing.

Not exactly Hawaiian, but no less tropical and delicious, is the piña colada. If you like rum, pineapple, and coconut (well, who doesn’t?), then you’ll go crazy over this staple. The light-colored cocktail is a simple mixture with a lot of flavor. It’s refreshing and is exactly the kind of drink you can picture yourself sipping as you enjoy the tropical warmth of the islands.

Like most tropical drinks, the piña colada is on the sweet side of the cocktail scale.

The name may not sound very pleasant, but the cocktail certainly is. Remember Henry Yee? Well, the Blue Hawaii isn’t the only thing he’s known for. More than 60 years ago, Harry was crafting a whole bunch of other tropical creations.

To scratch that tropical itch, he took 151-proof rum and bourbon, and mixed it with lilikoi (or passionfruit) puree. An additional shot of dark rum tops it off, giving it a smooth—and potent—flavor. 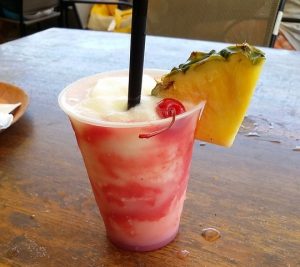 Who can pass up a drink with a clever name? There isn’t one set-in-stone recipe for a lava flow that you have to stick to, and people love to tinker with the base ingredients. You’ll find some recipes using coconut rum and others replacing it with light rum. Experiment to see which combination you like best!

Typically, the rum is typically blended with banana, strawberries, pineapple juice, and coconut milk. The name comes from how it’s served, as the strawberries are blended first and the rest of the ingredients are poured over the red liquid. The way it comes together gives the appearance of a flow of lava. Well, kind of.

Definitely not to be confused with the traditional Hawaiian dessert made from coconut milk, the haupia cocktail is a drink that goes well with dessert. Heck, it practically is dessert! White creme de cacao serves as the base, and is mixed with coconut rum for that tropical touch. Coconut cream adds a layer of richness.

Can I Order These Delights at Any Luau?

Just about. The Polynesian Cultural Center is a completely alcohol-free venue. Other than that, most luaus will have the ingredients necessary to create any of these flavorful drinks. No matter which cocktail you wind up getting, they’re all perfect for your Hawaiian luau, and pair nicely with the sumptuous spread of food. Just don’t overindulge. You want to be fresh the next day to continue your Hawaiian adventures!