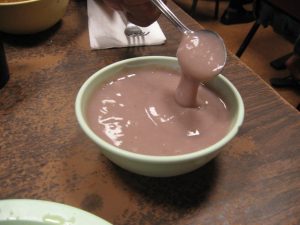 Poi has always been a staple of the Hawaiian diet

Taro was a staple of the ancient Hawaiian diet in the way corn was a staple in many parts of the Americas. Taro was so important to the Hawaiians that they considered it to be the older brother of the human race! From the earliest days of human settlement in the islands, the Hawaiians had vast self-irrigating taro fields that carpeted the islands, yielding  huge amounts of the dish known as poi. The irrigation system was ingenious enough to allow the farmers to work less and surf more. After all, the Hawaiians were one of the first recorded societies to set time aside for relaxation and play. 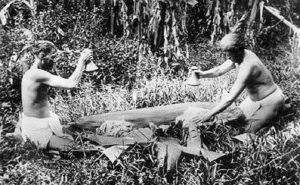 Poi comes from taro, or kalo in Hawaiian. which has large heart-shaped leaves and a tuberous root called a “corm.”. That’s where most of the nutrition from taro comes from. After being steamed or baked, the root is pounded into a purple paste. That paste is poi, and many Hawaiians today still eat it in great quantities.

When fresh, poi has a slightly sweet taste that slowly goes sour, similar to the aging of cheese. Some like their poi sweet; others relish the sourness that comes with fermentation. People use fingers to designate the different thicknesses of poi. One finger poi means you can scoop it out of the bowl and eat it off that finger. Two fingers mean—you guessed it—you need two fingers to scoop the poi because it isn’t as thick. Water is added to adjust the thickness. Poi can be as runny as soup or as thick as custard. It all depends on how much water is added.

Poi in the Hawaiian Diet 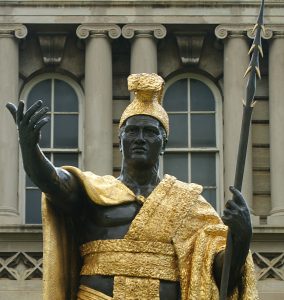 King Kamehameha I reputedly stood over 7 feet tall. He probably ate a lot of poi.

Poi is also a nutritional powerhouse. Captain Cook and his crew wrote about how healthy the Hawaiians were. This was at least partially due to the universal consumption of poi – one of the earliest “superfoods.” Poi is chock full of vitamins and is one of the true hypoallergenic foods. Even today, many parents in Hawaii feed their infants poi, especially those allergic to baby food. Poi is also a probiotic and even helps fight cavities! It’s also great for anyone with digestive issues. Poi has made something of a comeback as local chefs find new ways to utilize the purple plant-based wonder food. When you come to the islands, be sure to try some poi, especially with fish, in true old Hawaiian style. No trip to Hawaii is complete without some poi.