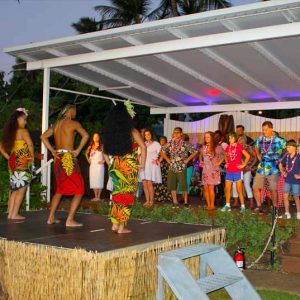 Pay attention – you might get called onstage to show off your hula skills!

“You have to check out a Hawaiian luau!”

You’ll hear it time and time again from anyone who’s been to the Hawaiian Islands. The luau is a staple of this tropical paradise and a great way for visitors to get a taste of Hawaii’s rich and vibrant culture.

Even if you aren’t entirely sure what a Hawaiian luau entails, you know there’s food. Lots and lots of food. You know you may be able to get a mai tai or two. And you know that, at some point, you’ll probably be presented with a lei. But what about the entertainment? You probably know about the traditional hula, but that barely scratches the surface of what traditional luaus have to offer.

If you’re on the fence about going to a luau and the prospect of all that food isn’t enough to sway you, then maybe a breakdown of the entertainment you can expect will help!

As we mentioned, hula dancing is always a centerpiece of the luau. The traditional dances tell a stories not through words, but through movements, music, and chants. Typical hulas tell the story of the Hawaiian Islands and the Pacific voyagers who sailed across the ocean to make their home here.

Just how do the performers perfect the rhythmic and deliberate dance? You might get the chance to find out, since many luaus offer interactive lessons with hula dancers. You might not walk away a master at the dance, but you’ll have a clearer understanding of its purpose and the basic movements. 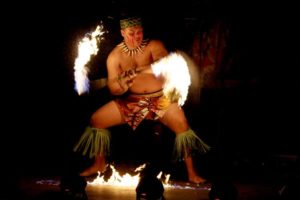 Fire knife dancing is best left to the experts!

Where the hula dancing you see at a luau tends to be gentle and swaying, fire knife dancing is a fast-paced and exciting display. As the name implies, performers work with two very exciting things: fire and knives. While it may sound like a spectacle intended to wow modern audiences, fire knife dancing has its roots in older Samoan ceremonial dances.

Unlike hula dancing, you won’t get to try your hand at spinning flaming machetes; fire knife dancing is something that’s better off witnessed and not attempted.

Traditional luaus often welcome guests with fresh flower lei. If you’re curious how they thread the flowers to create such a beautiful piece, many luaus offer you the chance to try your hand at the ancient craft.

The lei is a symbol of friendship and aloha that you’ll want to share with your closest friends and family. 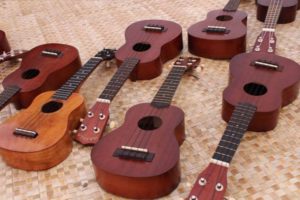 Try your hand at playing the ukulele

Pay attention to the music of a hula performance and you’ll usually hear the sounds of the ukulele. This tiny string instrument was introduced to Hawaii by Portuguese immigrants during the reign of King Kalakaua—the Merrie Monarch also credited with the resurgence of hula—who was a huge fan of the new instrument.

You can get the chance to tinker with an ukulele (pronounce it like the locals: “oo-koo-leh-leh”) at most Hawaiian luaus. Learn a few chords and  notes to some traditional hula songs. You’ll love the charm of the little instrument as you learn about another facet of Hawaiian culture.

One of the most exciting interactive experiences you can have at a luau is learning how to throw a spear. No, you won’t set out on a hunting expedition to catch the kalua pork, but it’s a fun activity that helps you feel more connected to Hawaiian customs.

Who knew you’d leave a luau not only with a full belly but also with some new skills?

As you can see, the Hawaiian luau may revolve around the feast, but there’s loads of fun to be had at these cultural festivities. Book your spot at any of the island’s great luau experiences and when you return, you can bet you’ll be the one saying: “You have to check out a Hawaiian luau!”