How Kamehameha II Broke the Taboos 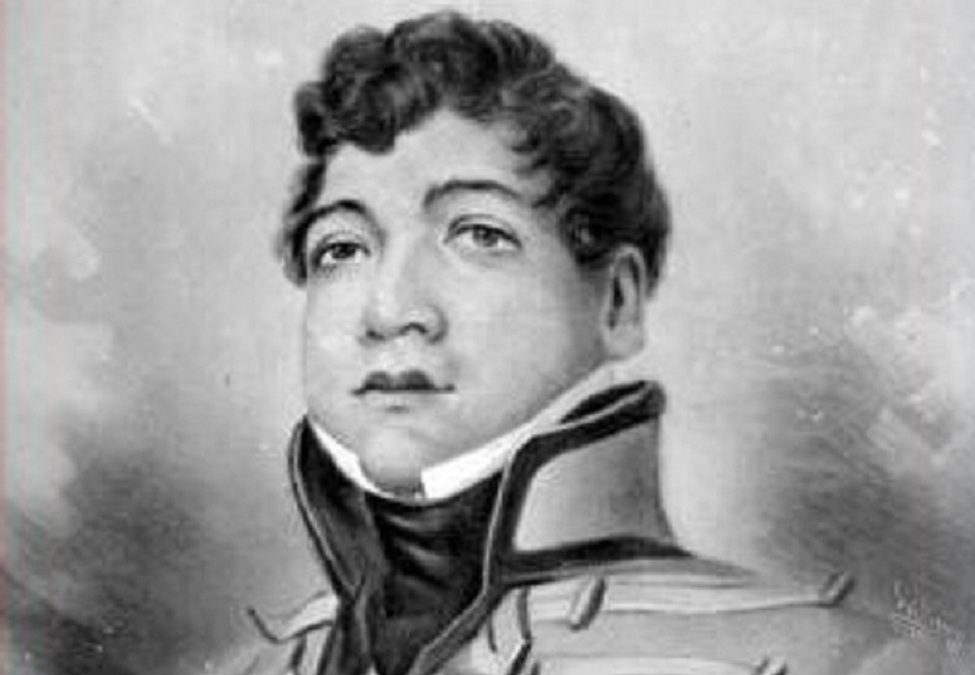 How Kamehameha II Broke the Taboos

Hawaii is an enchanting place to visit, with beautiful weather, gorgeous landscapes, a relaxed vibe, and friendly locals. Lovely music and delicious food are plentiful, both of which are best enjoyed among good company. But what if we told you that things weren’t always so free flowing, and there was once an era of very strict rules and prohibitions. Cue dramatic music. The social-religious system that existed in Hawaii prior to 1819 would be viewed as extremely harsh in today’s world. So, just how unpleasant about it? Let’s dive into what exactly the old system entailed and meet the bold man who single-handedly disrupted its course, in the process helping to create the beautiful Hawaiian luau we know and love today. This is the story of how King Kamehameha II broke the taboos once and for all. 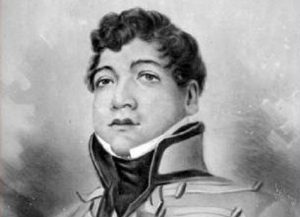 Kamehameha II broke the taboos. He was a snappy dresser, too. 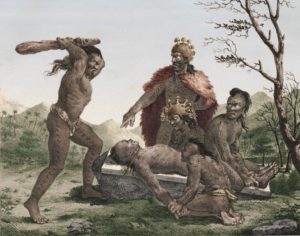 The ancient Hawaiian religious and social system was known as kapu (the Hawaiian-language variant of the Polynesian word tabu, or taboo), and it included a strict code of conduct, laws and consequences that were brutally enforced. This system affected all aspects of Hawaiian life including gender roles, politics, religion, and lifestyle. There were many restrictions imposed on the Hawaiian people under kapu, with many of the most extreme ones being applied to women. The system itself was based on beliefs about mana, or spiritual power. The word “kapu” is usually translated as “forbidden.” If a rule was broken or an offense was committed it was considered kapu and this was strictly enforced. The offender was often sentenced to death even if the kapu was committed unintentionally. Individuals within the community were assigned the role of ‘ilamuku—law enforcer—and were responsible for tracking down kapu breakers. People were put to death by clubbing, stoning, strangulation, drowning or burning. The system and its application were relentless. There was no questioning, trial, or compassion offered for offenders, they were immediately put to death. Often times the accused would take their own life before the ‘ilamuku got to them.

Lots of Rules About Food

There were various classifications of kapu that centered on different relationships within the ancient Hawaiian communities. Ai kapu was the system that dictated what type of contact between men and women was permitted. Ai kapu loosely translates to ‘sacred eating’ and it was strictly prohibited for men and women to eat together at any time. Legend says that this law was created by Wakea, the sky god. Wakea wanted to sleep with his daughter (the gods had different rules, obviously), so this law was developed so that he could pursue his daughter while his wife was eating. This way his actions would not draw any suspicion. Like we said, different rules.

Not only were women prohibited from dining with men, what they were allowed to eat was regulated as well. The most sacred foods were totally off limits to women. Doesn’t seem fair. This prohibition included 67 of the 70 varieties of pork (who would have imagined there were that many), bananas, coconuts, taro and certain fish. As if declaring that women could not eat these delicious foods wasn’t bad enough, they weren’t even allowed to be a part of their preparation or in many cases even touch them. Women were also not permitted to enter the home while her husband was eating. The system went even further, by prohibiting women to have anything to do with other applications of these foods. For example, they could not make or use coconut rope. There were also some seemingly random rules applied under this system such as when fisherman were setting their hooks everyone in the community had to remain quiet. There was probably a good reason for this.

Hail to the Chief – Or Else

This guy is a Chief, but he won’t kill you if your shadow falls on his house

Kapuhili were restrictions (yes, more restrictions) that dictated the type of contact that could be had with ali’i, or chiefs. These rules applied to all people who were considered to have known spiritual power. Now here is where it gets really out there. Some of the things that were prohibited to do are not things that anyone would likely want to do anyway. When entering a chief’s personal area, regular folk were not allowed to come in contact with his hair or fingernail clippings. If you think this is a strange rule, you are not alone. They were also not allowed to look directly at him or be in his sight with their head at a higher point than his. If red or yellow feathers were worn it was considered kapu as these were reserved for royalty. When the chiefs or other high standing community members, ate the people around him (or her: women could also be chiefs) had to kneel. Commoners could also be put to death if their shadow happened to fall on a chief—even on his home. One had to be on constant guard if one wanted to make it to suppertime.

The only real purpose for the kapu system was so that those at the top of the hierarchy could maintain their positions of power. People believed (well, they were told) that the gods guided the system and by breaking the kapu, the gods would become angered and would bring their wrath down on the entire community.

When Kamehameha II Broke the Taboos

This kapu system was in effect until 1819, when King Kamehameha II really shook things up. He smashed the taboo/kapu codes by sharing a meal with the Queen and his mother (two different women). Kamehameha took the throne in 1819 and after only six months in power he brought the ancient kapu social religious system to an end. Yup, Kamehameha II broke the taboos over dinner. This shocking act dramatically altered the fabric of Hawaiian culture, and changed the everyday lives of ordinary people. After that night, there was a period known as ai noa, which translates to “free eating.” In this time of taboo-breaking, women were allowed to eat with men and consume previously forbidden food. The priests were no longer permitted to offer human sacrifices to the gods. The people said, “Whew.”

Kamehameha II and his queen both died of measles contracted during a visit to London in 1824. His ruling style was certainly different from that of his predecessors, and he did bring about much-needed change for the Hawaiian society. 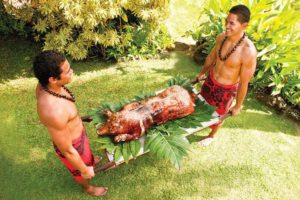 It’s just not a luau without a roasted pig

King Kamehameha’s memorable act of dining with women is what paved the way for the beautiful tradition of luau as we know it today. A Hawaiian luau is a traditional feast and gathering that is accompanied by entertainment. The name “luau” comes from a popular—and delicious—dish at these feasts: a mix of squid or chicken with shredded taro leaves (luau in Hawaiian). Other dishes that are included in a traditional luau include poi, kalua pig, poke, lomi lomi salmon, and haupia. The gathering always centers around traditional Hawaiian music and of course, the beautiful dance style known as hula. King Kamehameha III (he took over after our beloved II) obviously felt like he needed to one-up the previous ruler, and he threw one of the biggest luaus to date. Over 1800 guests attended, 271 roasted pigs were served, 3,125 salted fish, 2,245 coconuts and 4,000 taro plants – now that’s a feast!

During ancient luaus, which were then called aha’aina, all dishes were enjoyed with one’s hands and everyone was seated on mats on the ground. Large groups of people would gather around leaf-adorned tables that were decorated with flowers and other beautiful natural elements. Food was always abundant, and over the course of time the luau has grown to become an important and enjoyable part of Hawaiian life. Hula dancing became the main form of entertainment with fire knife dancing later being introduced as well. 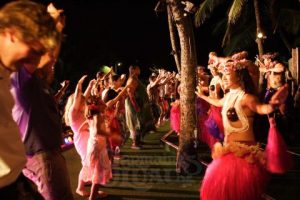 Nearly every luau offers hula lessons. Just go with it.

Luaus are happy celebrations filled with color, culture, food, music, and love. The modern luau continues to entertain and bring joy to those who attend and participate. There are two main occasions when Hawaii locals typically host luaus: a child’s first birthday and high school graduation. Luaus are also now a big part of Hawaii’s tourism sector, and offer visitors the chance to have an authentic experience complete with food, dancing, music, and picturesque surroundings. Since 1819 the world has become a much more diverse place, and increased travel has brought visitors from all over the globe to Hawaii. As a result, the modern-day luau experience has become somewhat of a melting pot itself. A luau now represents our multi-cultural society, and the food and entertainment has evolved to be as diverse as we are. A luau is a must-do when visiting the islands. You’re sure to enjoy yourself during this beautiful celebration of Hawaiian pride.